History of the Firm

Smith, Burnett & Hagerman, LLC, located in Larned, Kansas, is the proud heir of a rich tradition of serving legal needs of pioneers, business and farm organizations in west Central Kansas. 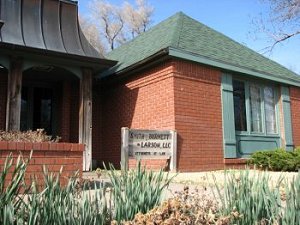 The law firm's Larned offices are among the best in town. The building was custom built in 1970, and the firm has been at this location since that time.

Larned is part of Pawnee County, and literally is located on the old Santa Fe Trail at the fabled "Pawnee Fork."

where a host of mental health treatment and incarceration problems arise each year. Our senior partner, Don Burnett, helped enact and draft many of the probate laws affecting entry into the mental health system in Kansas.

Glee Smith Jr., as senator, and then President pro tem of the Kansas Senate from 1957 to 1973, helped enact many of the laws of our state, most especially the 1964 civil procedure code and the codification of the 1969 criminal code.

Our small town roots hold down our costs but we have a multi-county reach into west Central Kansas. We typically interview new clients without charge. However, we do not give legal advice over the phone. We try to get the work out with the least delay.

Call or email us if we might assist your legal needs.